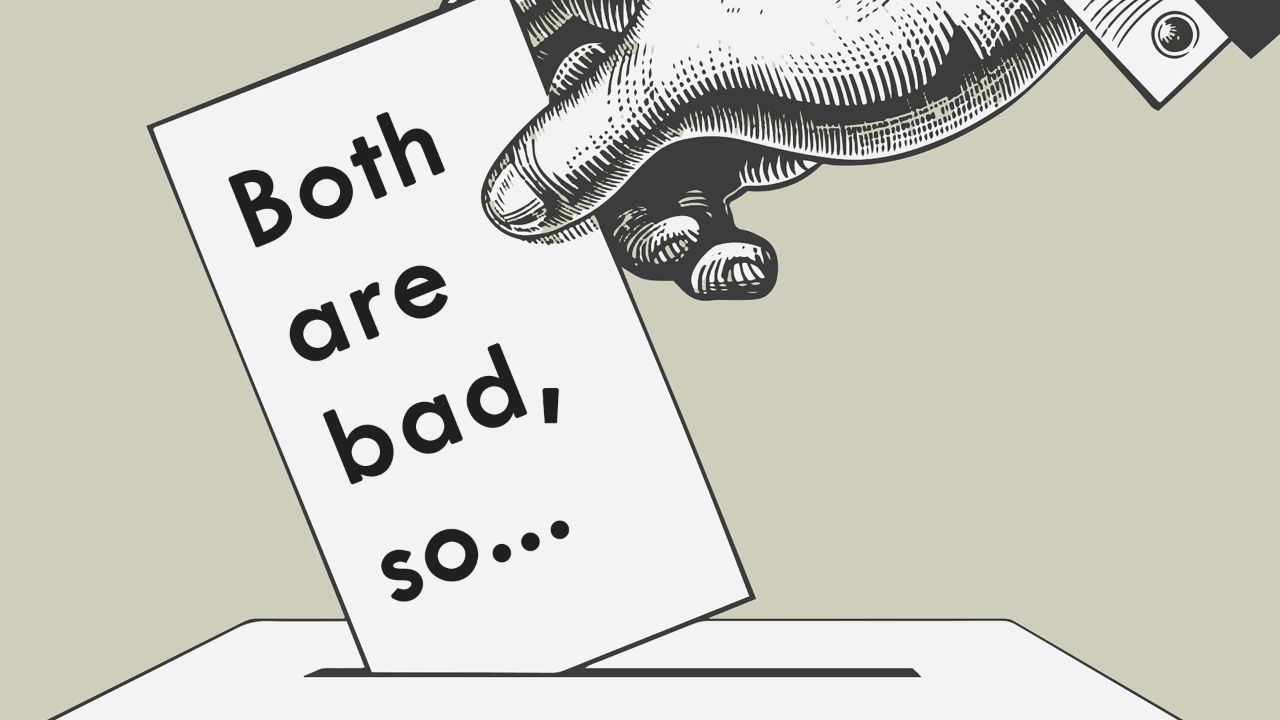 One does not have to be a leftist to know that neither Donald Trump nor Joe Biden stand with the interests of the working people. When we ask workers who they prefer, the reply is often “Both are bad.” It is exactly with this sentiment that we call for participation in the coming election in order to break it. Our call is not to bolster one party over another—but rather to act and lay groundwork for the organizing necessary to win back all that has been dispossessed from working people.

Working people are well aware that, elections, like all the other institutions and processes in this country, are set up against them. The ruling class who controls finance capital, with their superfluous money and time, use the election as a tool to set their agenda. as working people, we have neither resource. In the election, we are told to either follow the rich's agenda—by simply opting for the lesser of the two evils—or hate the process all we want and resort to the “freedom” to walk away.

Those advocating for lesser-evilism stress that, since the bad guy already set the agenda, all we can do is to extract some compromises. and when the system throws crumbs of benefits—such as raising the minimum wage without ending wage theft—they are the first to proudly claim that the system, in fact, does make progress.

Those refusing to engage with the current election constitutes the other side of the same coin. Little are they aware that they are just offering more leeway for Trump and his active supporters to win bigger. It is as if they are fully prepared to announce to the world, when Trump is re-elected, their self-fulfilling prophecy: “I told you the system is doomed.” Whether out of political purity, or of cynicalism, they leave Trump's divisive agenda to exacerbate the infighting among the working people.

But are elections an end, or a means to an end?

Trump's Racist Mandate is Further Weakening Our Mass Base

During the four years of Trump's presidency, working people have become more divided, and therefore weaker than ever, to fight systemic looting by the rich. We have seen more wealth going to the top 1%, especially during the COVID-19 pandemic. In order to avoid being targeted, the US ruling class has long been cultivating nativist sentiments around different identities so as to pit certain groups of workers against the rest—especially during a health and economic crisis like the one we are facing now. Trump, being the ruling class's representative, naturally has to execute its agenda. His double standard—encouraging Asian American or diaspora to blame Black Americans for poor public safety, while coining “Chinese Virus” on their backs—serves as the latest textbook example.

Historically, this is also manifested in the bipartisan portrayal of immigrants as hard-working job-stealers and of Black people as free-riders on welfare. But while the former have no rights to organize—and thus remain super-exploited—the latter are either discriminated in job markets or forced into prison labor without rights. So often do we see that when working people blame each other, we are distracted from fighting against our common enemy: the ruling class and the elected officials as their representatives. Their wealth accumulation depends on our exploited labor and time.

Due to the lack of unity among us, our working and living conditions continue to go downhill over the decades.

The System Is Creating Some Leeway for Us to Organize Ourselves... Now!

If Trump gets re-elected, his divisive and pro-1% agendas will continue to prevail. No longer worried about the next election, he will in the next four years care less about pressure from the people. By then, the only viable alternative out there will be the Democratic Party, who will be and have been conveniently pointing fingers at Trump.

Biden, though essentially representing the interests of the same class, has to contradict Trump as an opponent. Once elected, he will be forced to pretend to be different from Trump in handling the crisis. This will create an opening for us to pressure Biden, where we can boldly put out an agenda with working class demands that unify workers across boundaries to realize our common interest. This should include:

• end Trump's racist and anti-immigrant policies • Immediately respond to limit the devastation of the COVID-19 pandemic by prioritizing the health and economic wellbeing of working people • Give equal rights for all workers so that we can collectively organize to improve our conditions.

Here's the Chance, if We Dare to Seize It

In other words, we ought to utilize the contradictions between the two candidates to bring working people together build our base against our common enemy. Of course, Biden never truly intends to unify the working class. Once he shows his true color, we will have already been organized around our agenda as a class. We will have been able to split from the establishment to grow as our own political force, independent of the two bourgeois parties—we will take both down, one at a time.

If we want to organize working people and provide leadership to advance our class interests, we should not dismiss voting as just a personal choice, but see it as a tool to organize and to put out an agenda. Therefore, we ask people to vote for Biden, spread the message, and actively campaign for him to resist Trump's incessant thwarting of our mass base—through this process, we will be organizing ourselves and those around us. Given the current crisis, this election presents the best opportunity.

Friends and comrades: do you really want to let this opportunity go to waste?